Which, for those of you familiar with Danny Kaye is said like “Oh the Doge . . .”

Bear had quite a week.  His birthday was Thursday, and he had a concert this weekend with the Scottish Fiddling group he’s been playing with.  (He plays cello but it still fits in with fiddlers)(really)(…)

He (We) also had been invited to a party at the home of some very good friends.  Friends who are moving down to Long Beach.  Whose parties we’ve been missing due to one thing and another but who keep inviting us anyway (They’re VERY nice people)

So our week went along as it so often does, my checking in every day or so – how’s the week, anything exploded yet?  This is because he’s likely to come home and pack for a red-eye and tell me as he’s rushing out to the limo.

No crisis loomed, the week seemed to be pretty under control.  For my part, I made sure I didn’t have any patients in the evening that would interfere with our getting to our friends’ in a timely fashion.

All that changed Saturday morning when my Best Beloved FINALLY opened his emails and discovered his concert was SATURDAY – all day Saturday, wouldn’t be getting back until midnight or later.

I have memorialised this week using the wonderful art of Allie Brosh and her classic post about reporting pain levels to a doctor: Boyfriend Doesn’t Have Ebola. Probably.

Enjoy the trainwreck of my week and go check out Allie’s blog, she’s quite talented and a little twisted. 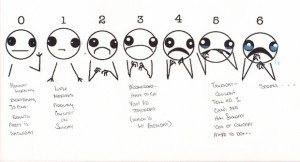 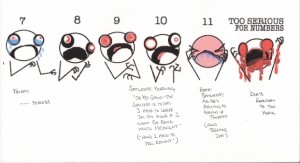